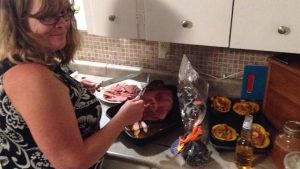 D’erections: When you arrive in downtown Wyevale, look for the big sign that says, “JUGS” and park directly across the street, by the mailboxes. Once parked, cross the street at the only street light, once it turns green (for the direction you’re walking). Evelyn & Peter live in the house right behind JUGS City…