Join us for the Longest Night of the Year! 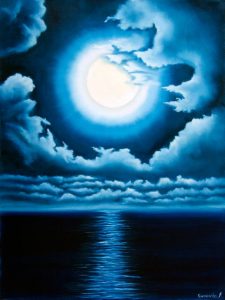 Sunday Dec. 23, 2018:  Hares: Messiah & Professor Dude
It’s not hard to understand where the name of this moon comes from, as December is the month in which the winter cold fastens its grip on this part of the world. On occasion, this moon was also called the Moon Before Yule. Sometimes, this moon is referred to as the Full Long Nights Moon, which is appropriate because the winter solstice (the longest night of the year) occurs in December, and the moon is above the horizon for a long time. In December in the Northern Hemisphere, the full moon makes its highest arc across the sky because it’s diametrically opposite to the low sun. In fact, the moment of the winter solstice comes just over 19 hours before this full moon, at 5:23 p.m. EST on Dec. 21. Peak fullness occurs at12:49 p.m. EST (1749 GMT). 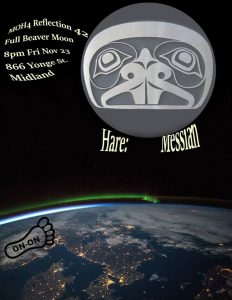 Friday Nov. 23, 2018: Hare: Messiah
At this point of the year, it’s time to set beaver traps before the swamps freeze, to ensure a supply of warm winter furs. Another interpretation suggests that the name Full Beaver Moon comes from the fact that the beavers are now active in their preparation for winter. It’s also called the Frosty Moon. Fullness occurs at 12:39 a.m. EST (0539 GMT). 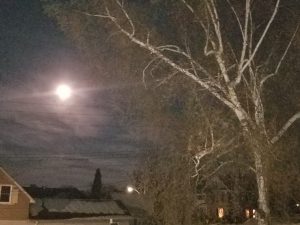 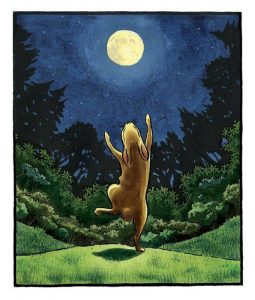 Wed Oct. 24, 2018: Hares: Messiah & Loosie Stooley
With the leaves falling and the deer fattened, it’s now time to hunt. Because the fields have been reaped, hunters can ride over the stubble and more easily see foxes, as well as other animals, which can be caught for a banquet after the harvest. Fullness occurs at 12:45 p.m. EDT (1645 GMT). 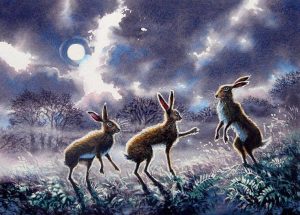 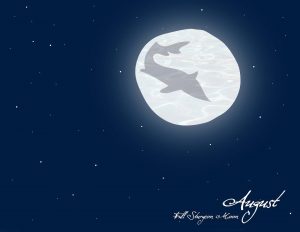 Monday Aug 27, 2018  The Full Sturgeon Moon rained out!
This full moon occurs when this large fish of the Great Lakes and other major bodies of water, like Lake Champlain, are most readily caught. A few tribes knew it as the Full Red Moon, because when the moon rises, it looks reddish through the sultry summer haze. It is also known as the Green Corn Moon or the Grain Moon.Fullness occurs at 7:56 a.m. EDT (1156 GMT). 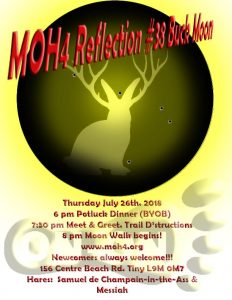 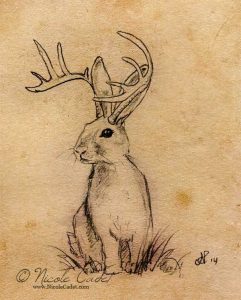 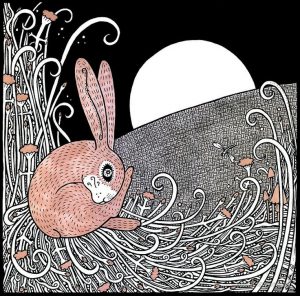 Hares: Messiah, Astrolabe & Kiss Me Or Get Out!

Hares: Astrolabe & Kiss Me Or Get Out! 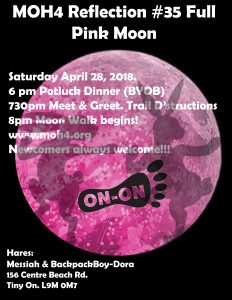 Get out of the city and into the country to reflect under this month’s Full Pink Moon with the Moon Over Huronia Hash House Harriers. You’ll be glad you came! 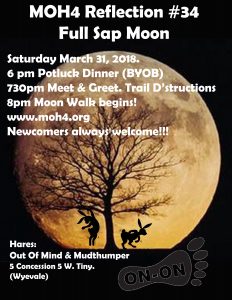