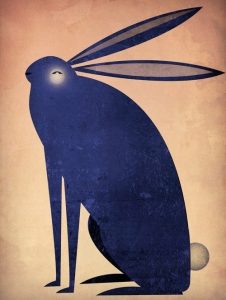 We’ve all heard the expression, “It only happens once in a Blue Moon!” meaning, once in a very, very long time, or some event that is extremely rare. This coming Friday we will witness a Blue Moon, which by astronomical terms is a lunar event that occurs when two full moons appear in the same calendar month, (approx every 32 months), the second Full Moon is referred to as the Blue Moon. So what better night to begin a new Hash House Harriers club/kennel that runs, (and walks) every full moon, than this Friday?

This new club/kennel will be called Moon Over Huronia Hash House Harriers (MOH4), incorporating both what we’re doing and where we came from, (our Mother Pack, the Huronia Hash House Harriers~H4). For the inaugural Reflection (run&walk), please meet at the Roasted Cherry Café at 329 Balm Beach road W. around 7:30pm. We’ll get organized and the first Reflections (run & walk) will commence at 8pm sharp.

Everyone is welcome! We will return to the Roasted Cherry Café approximately 45 minutes later for the On-On (snacks and cold drinks)! Come on on out and join us!

MOH4 is a group of (former) cross-country runners and others, who enjoy getting out, running or walking, then enjoying liquid refreshments and reflecting amongst friends, the night of the Full Moon.

MOH4 will run once a month ideally on the night of the full moon. The run typically starts with most Hashers arriving a bit early (6pm Potluck Dinner {BYOB}, or 7:30pm Meet & Greet at the run venue. The Hare often provides a few nibblies to enjoy with the runners and walkers, as well pre run beverages while they prepare for the run ahead. The Grand Master will then call the Pack to order some time just before 8:00 PM with a welcome and then some brief D’structions on how (s)he would like the run to be conducted. Ideally there will be two “runs”, one for the walkers and one for the runners! The trail is set by the unique Hares?WonderPointers, (or FRB’s ~ Front Running Bastards), one of which is given to each Pack. Under the uncanny guidance of the Hare/WonderPointer the runners and walkers will wend their way through the local area until they are guided back to the On-On; where the quenching of their thirsts and hunger is intermingled with some serious socialising (and boisterous singing)!

Later on the Grand Master will again assemble the Pack to review the run/walk, celebrate birthdays, weddings and other transgressions. Like in many Hash House Harrier Clubs/Kennels, the Grand Master has been known to reward the disobedience or insolence of his members by giving them the opportunity to cool their nether regions on some ice while they reflect on their deeds or words. Usually this form of discipline is meted out sparingly unless the Grand Master is a tyrant or megalomaniac (which, unfortunately occurs frequently).

After the run and the Circle it is traditional for the members to salute the full moon by reflecting back some of its brilliance. If their are enough members present, a 21 bum salute may occur, which is a sight in itself.

On special occaisions or whenever we remember, the Full Moon anthem “By the Light – Reflected off the Full Moon” may also be sung with gusto. For those of us who have poor memories, below are the words to the song that you can print out to aid your rendition.

By the Light, Reflected off the Full Moon

(Tune: By the light of the silvery moon)

By the light… reflected off the Full Moon

Have a spin… we’ll find the On Home soon

And don’t forget, take some time to reflect

With the Hash that’s Unreal… Hashing with Full Moon

By the ice… that’s where we stand at Full Moon

I want to drink… with Full Mooners and sing out of tune.

What You Need to Bring

We welcome all and there is a nominal fee of $10 to cover snacks and beer.

Bring your running shoes, a Harrier t-shirt (or other Harrier related clothing) and a great attitude!

Beer will be provided for any charges that may be brought against miscreants.

By attending our monthly outings, you undertake not to hold the organizers, any affiliated individuals or the managers and owners of properties you traverse, responsible for any injuries, or mishaps whatsoever, and accept full responsibility for all your own actions.

If you choose to run or walk with us, you must agree and accept that the MOH4 Mismanagement Officers, the Hare(s) duly appointed by the Officers, and the owners of the land and property where the run will take place, will take all reasonable measures to ensure the safety and well being of the Hashers/participants, but accept no liability for any injury, damage or loss, however these may occur. You will also not hold the Mismanagement Officers, its members or any affiliated person(s) responsible for any accident, loss, damages or injury sustained by yourself before, during or after the run/walk.

Putting the fun back in dysfunctional

Happen about seven times in 19 years, or about once every 2.5 years.

According to the Oxford English Dictionary, the first reference to a blue moon comes from a proverb recorded in 1528:

“If they say the moon is blue, we must believe that it is true.”

Emeritus Language Professor Roly Sussex says, “At that stage it was referring to the moon being mystical, but they had observed already that you only get two moons in a month once every two years or so.” He continues, saying, “it was given a second life in the 19th Century when people began using the phrase ’til a blue moon’. That usually meant never rather than extremely seldom. This was one way of saying that it’s a rare event.”

If you have half a mind to join the Hash… that’s all it takes!

Come and join in on the fun!