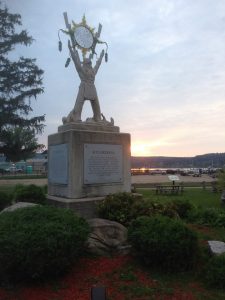 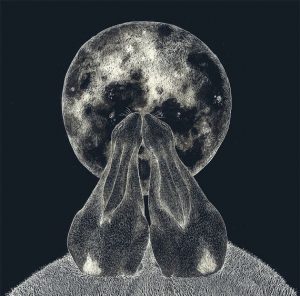 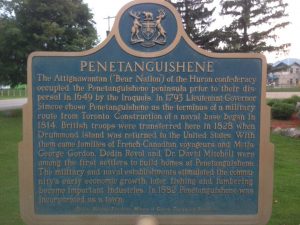 Penetanguishene, home of the Attignawantan (“Bear Nation”) of the Huron confederacy prior to their dispersal in 1649 by the Iroquois, was quiet this particular late August evening. At the base of Main Street, across from the Beer Store, Moon Over Huronia Hash House Harriers gathered beneath the Statue of the great Kitchikewana offering up thanks and praise, reflecting among each other and saluting the full moon, as sacrifices of sudsy yellow nectar landed at his feet. Thus began our Second Reflection entitled, “RUNDEZ-VOUS CHAMPLAIN 2015” as the Pack of Moon Over Huronia Hash House Harriers set off out into the sunset, on down the commemorative trail, and on on! 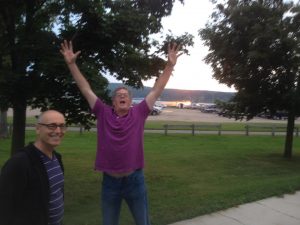 Disillusioned, Fata Morgana and the Senator Stinkfoot took the lead, and like the Tin Man and the Scarecrow, this heartless, brainless couple began skipping on down the red brick road. 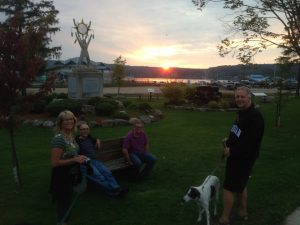 Puss’n Boots’n Dowser’n dogs followed along. Seems they were made custodians of their neighbours’ rescue dog, Reba for the week, so now Marlee has a friend to walk with, bark at and a new butt to sniff. Dogs are always welcome in this Pack. 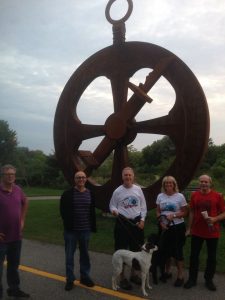 Messiah, having only half a mind, couldn’t remember the name of Champlain’s tool? He and Fata Morgana struggled for names and words to describe it, as they stood beneath the twenty-foot replica statue now firmly ensconced on Penetanguishene’s waterfront trail. All Messiah could remember was that his Father, Whitey, had written notably about it, in his book, Midland On Georgian Bay. Just Rob laughed, saying there was going to be Hell to pay, next time Messiah runs into his Father. Dowser quickly defused the escalating discussion by confirming that Champlain’s trusted instrument was in fact an Astrolabe; used to make astronomical measurements, typically of the altitudes of celestial bodies, and in navigation for calculating latitude. In order not to forget again, Messiah quickly christened Just Rob, Astrolabe, (well at least until something better comes along). Where’s Bypass when you need him? 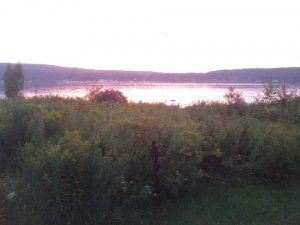 The Pack continued snifting along the waterfront trail, until it came to a statue of Sir John Graves Simcoe, Ontario’s first Lieutenant Governor. If you look through his statue’s telescope, you can see a ship sailing into Penetanguishene Bay. Simcoe will forever go down in infamy in these parts, for his pet names. Well, perhaps better stated, the names of his wife’s pets. Now being Harriers, we find nothing wrong with dogs or stupid dog names for that matter. As you can see from Marlee and Reba’s attendance on this Second Reflection, we even include them; but naming Townships after dogs ends up sounding utterly ridiculous! Tiny, Tay and Flossy were Elizabeth Simcoe’s three Scottish terriers. Tiny of course, ends up being the largest of the townships, Floss originally dropped the “y” before dropping the preposterous moniker altogether and changing their name to Springwater. On second thought, perhaps an early Hash House Harrier was behind the naming? Hmmm things that keeps one up at night… 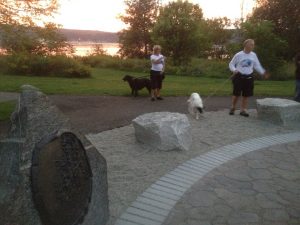 Here the Pack turned onto the main trail, er tiled concourse which led to the waterfront’s edge and viewing platform. It was discussed that this pathway too was a modern sculpture, an ode to Highway #400 for getting us to and from the Big Smoke so quickly! (dependant on time of day, of course). Oh those subversive artists! 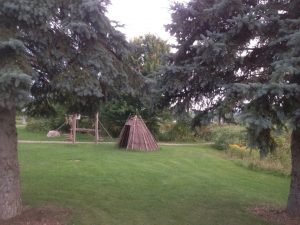 The pathway was lined with empty sculpture stands, square, white boxes eagerly awaiting their long, overdue sculpture installation. Astrolabe and Messiah hopped up on them and struck some Harrier poses. Then fearing local superstition that they may potentially be turned to stone, jumped down and continued on on with the Reflection… 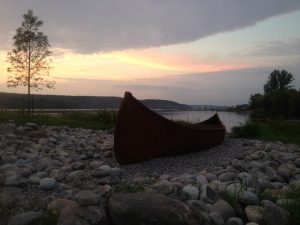 Next up, along the shore was a large over-sized orange canoe. It was made out of metal and symbolized Champlain’s landing on the beachhead of the Penetanguishene Peninsula. In fact, it was four hundred years to the night that some native zipped in and out from this exact spot. It was a bustling landing Port after all, and was safe to say that every night, four hundred years ago, canoes came and went from this exact spot. But we’ll usurp the moment to add some profundity to our own story. 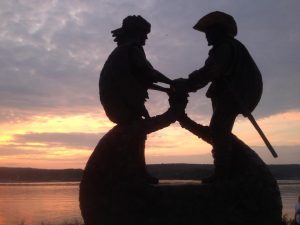 Then there it was. La pièce de résistance! The Great Meeting sculpture, of a Native Elder greeting Samuel de Champlain at the shores of Penetanguishene Bay! This great sculpture of peaceful first connection was highlighted with pink, orange, and purple as the setting sun illuminated Fata Morgana and the clouds overhead. 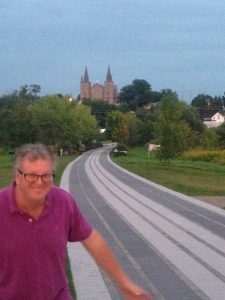 On the way out, Senator Stinkfoot led the Pack back down the empty tile-way, now resembling the 400 on a Monday night in the Winter. Further on down the trail, the Pack came across what appeared to be a back check? 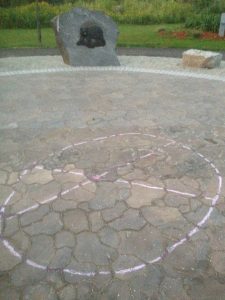 Other than the pink dot in the middle of a “circle with an ‘x’ marked through it”, the chalk drawing appeared well, to very much resemble a back check, (that’s a circle with an “x” through it, for those of you who can’t visualize). Surrounding the back check-looking chalk drawn graffiti were totem sculptures representing the Five Nations of the Huron Confederacy, Penetanguishene being the bear. 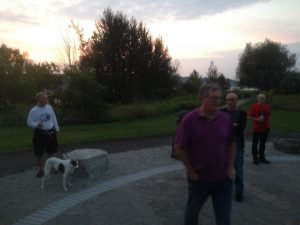 While Dowser mimed jujitsu moves outside of the Circle, Senator Stinkfoot, Fata Morgana and Astrolabe stepped into the Huron Confederacy Circle, to check out the Deer Tribe, amongst others. Like the ducks shaking their money-makers at Discovery Harbour, the Harrier Pack waddled along the waterfront, by the pirate ship playground, past the skateboard park, then turned just before the abandoned, toxically condemned, campground, went over Robert Street West and up the yet-to-be-developed road allowance. The Pack continued south, straight to the top of the hill, emerging somewhere behind Le Caron. Le Caron is an all French high school named after the feisty Recollet (Franciscan) priest, who jumped at the opportunity Champlain presented to visit Huronia and ultimately presided over what would become Ontario’s first Catholic mass. (I’d like to thank Midland’s own Dr. Andrew Nicholls for his very engaging book, A Fleeting Empire ~ Early Stuart Britain and the Merchant Adventures to Canada, which really puts this seminal Canadian period into perspective!)

Our Reflection continued with the Pack pouring out onto Poyntz Street, (taken from Etienne Brule’s nickname ~ do to seemingly always having an erection), so across Poyntz Street and then on down the Owen Street hill, ultimately careening through a few alleys until emerging for the Post Reflection On On at Ian Hackstetter’s historic home (the corner of Robert Street E and Maria Street). Latecomers Just Ralph and Professor Dude arrived just as the On On commenced. They asked about Ian Hackstetter’s whereabouts, but soon forgot as libations were served. Without Bigfoot present to hold the Silvery Moon song in key, the Pack went straight for the sudsy yellow nectar tasting. Having started the Pre-Reflection On On through toasting with local beer, Georgian Bay Beers Legend’s of the Bay series, the Pack continued to Think Globally & Drink Locally as they lit into the offerings of Barrie’s Flying Monkeys craft brew. Their brilliant target-marketing has their beer cases depicting Hash House Harriers running along yelling, “On On!” which seems to have penetrated Messiah’s half mind and voila, a customer is born. 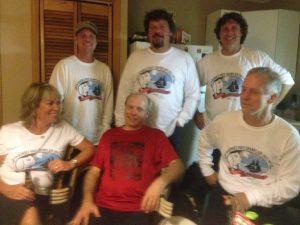 Puss’n Boots kicked off the Flying Monkeys tasting test by cracking open a bottle of Hoptical Illusion, while Dowser opted for the more stayed Genius of Suburbia. Smashbomb Atomic IPA was a favourite of Professor Dude and the Senator, Fata Morgana given his penchant for optical phenomena, surprisingly went from visually appealing Hoptical Illusion to a subtler, less jazzily named, Amber Ale. Noticing the tie-dye pattern on the back of its label, Professor Dude decided to give Hoptical Illusion another try. Astrolabe enjoyed the light, spaciousness of the Anti-Gravity Ale, but what’s in a name? 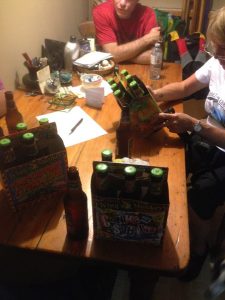 Speaking of names, the Moon Over Huronia Hash House Harriers Pack pondered over several for Just Ralph… Ralph, hmmm ralph as a verb perhaps? To Ralph or not to ralph, hopefully that isn’t the question.. Something has got to come up?! Technicolour Yawn, Spew, Hurl, Cookie Toss, Upchuck, Barf they all sounded so, so sick. Projectile Emesis, Praying to the Porcelain God and Talking on the White Telephone didn’t quite capture his essence. So given the celebratory evening, Samuel de Champain-in-the-Ass it is! (or at least until something better comes along, of course).

With the post full moon On On finished up, the Pack piled out into Ian Hackstetter’s back yard to observe the Sturgeon Moon rise up over Penetanguishene and reflect upon how great life is and being thankful for it. As the Pack began to disburse, Hackstetter was driving home down his street. Seeing this motley crew spewing out of his driveway, he drove around the block slowly, allowing for stragglers to make their way out, before he safely returned to his now empty home. Thus ends RUNDEZ-VOUS CHAMPLAIN 2015, the Moon Over Huronia Hash House Harriers’ Second Reflection. 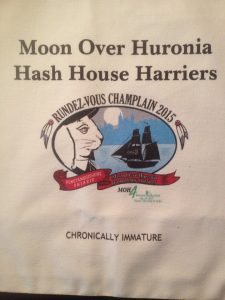